We had a great time exploring gratitude at the November Sunday Assembly that was held at the First Existentialist Congregation of Atlanta. There were rockin’ tunes, ice breakers, a psychiatrist’s take on gratitude, and of course: food!

To set the stage, before the main event there were about two dozen people that participated in the Science Circle downstairs. The discussion centered around the meaning of words, especially those related to science, such as what “theory”, “hypothesis”, and “law” mean.

Quite a few interesting topics came up. We talked about how school teachers should take competency exams before being allowed to teach science. Also, several people commented that science is never settled, so we should not declare theories as “facts”. Specifically, in the science community there are still strong disagreements about the actual mechanism of evolution; some favor Dawkin’s ideas of selfish genes, while others are partial to Gould’s ideas of populations being the main factor of speciation. Pardon me if I mistake the details! All I can say is I had a great time being exposed to such knowledgable people!

The main Sunday Assembly event started at 6 PM. The building was cozy; picture a short slice of pizza, with the speaker at the front.

The starting song was “Thank You” by Sly and the Family Stone, then Lori welcomed everyone. Marti did a reading of “A Simple Act of Gratitude“. My personal takeaway was on how we are linked to the past with the coins that our grandparents give us, and how we can find gratefulness through that.

The “I’m Doing My Best” segment was done by Jesse. He talked about how he suffered in the past with questions of what to do in his personal future, as well as concern about the future of humanity and whether we would go extinct. He said what helped him was journaling about what he personally enjoyed and where he would like to go. He was also helped by looking up the actual science and realizing the numbers indicate humanity has very little chance of long-term destruction.

Music followed: “How Sweet It Is” by Marvin Gaye, performed by Joe Buckner and Joe “T” Meadows. Thanks!

Next was an ice breaker. Since Thanksgiving is so near, we all got little colored paper in the shape of leaves and wrote down someone that we’re personally thankful for. Then we were encouraged to talk with someone nearby and share our story for why we’re thankful for our chosen person. Quite an effective tactic to make friends!

The song afterward was “Shiny Happy People” by REM. Cool!

Mark Vakkur did the main presentation: “Be Grateful for Gratitude”. As a psychiatrist, it was very interesting hearing his thoughts on gratitude. He has read up on the science and shared his advice with us.

For example, we went through a short exercise that started by looking down at your shoes and thinking of how they keep your feet warm and safe from the elements. We thought about the people that drove the trucks and ships, that glued and sewed the materials together, the plants, animals, and all the anonymous people that helped your shoes come to you and make your life better. Makes you grateful. Try it now.

A few other helpful strategies were shared. One was keeping a gratitude journal, where you write down 5 things you’re thankful for, once a week. It could be small like a lotion or shirt you’re thankful to have. The science shows that just this little exercise will boost your happiness for weeks and weeks. Another tip was writing a thank you letter and hand delivering it to the person. He said this was very effective for boosting joy.

He has graciously provided the [a]full-text of his speech[/a][Ed.: add link to it.], which I strongly encourage you to read. It has more useful techniques on the science of how exactly to make yourself happier.

To celebrate gratefulness, the next song was “What A Wonderful World” by Louis Armstrong. Check out this great YouTube video.

Then came some announcements. A couple of Atlanta Sunday Assembly members were in a car wreck recently and shared how they were grateful that other Sunday Assembly people came to their aid with gifts and other support.

The Atlanta Astronomy Club invited people to come to their next meetup for help in choosing what telescope to get. Sounds cool!

Kristy brought great news: the Sunday Assembly International Conference will be held in Atlanta! We are very grateful to have this opportunity! It will run from May 28-31, 2015. Get your tickets now! Read her blog entry for more information.

The finale was the food and hanging with all the other like-minded people. It’s a lot of fun to meet people you immediately feel at home with. You should come! And bring a friend!

The next Sunday Assembly will be on Luck, with the title of the presentation being, “Laughing in Disbelief at Our Crazy Good Luck!”. Come and join us on Sunday, December 21st at 6 PM at the First Existentialist Congregation of Atlanta!

(Click images below to read the November 2014 Sunday Assembly Pamphlet) 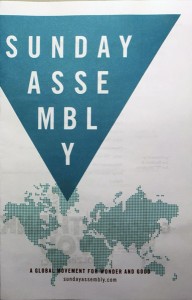 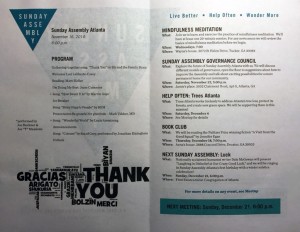 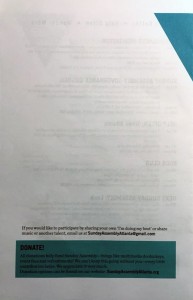